There are 59 total LEDs, 5 custom circuit boards, 30 feet of wire, two Mario figures, a controller holder, and everything else you see is either hand-made or laser cut. There's also a custom plate dedicating this to Miyamoto for all his hard work creating a plumber that travels through pipes to a better world, giving plumbers everywhere something to strive for.

The custom console stand has an integrated Wii remote holder and a compartment for recharging the included lithium-ion batteries. Each side of the stand features a small limited edition Mario figurine. These are out of production and were only available in certain parts of Asia. In addition to the highly detailed paint job they already featured they were further touched up and clear coated for a clean professional look. 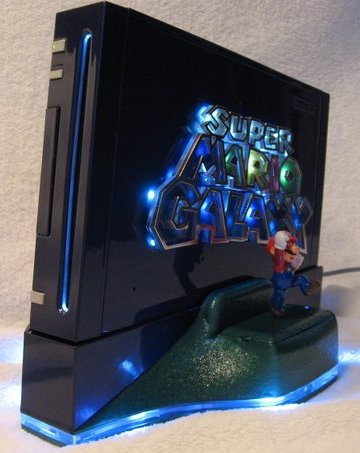 The modded Wii can be bought on eBay and the seller says a portion of the proceeds will be donated to Penny-Arcade.com's "Child's Play" Children's hospital charity.