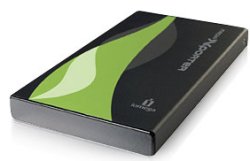 Iomega unveiled a new storage solution for gaming consoles. The firm's new USB-powered Media Xporter Drive features 160GB of storage capacity and is compatible with the PC, Xbox 360 and PS3 consoles. The drive is available for $119.95 (99EUR).

"The new Iomega Media Xporter Drive extends the value of today's most popular game consoles that are already evolving into home entertainment centers," said Ralf San Jose, global product manager for HDD Products, Iomega Corporation. "For the home-gamer enthusiast, the Media Xporter Drive provides an easy-to-use portal for 160GB of family photos, music files and videos to move beyond the computer room and into the family room for the enjoyment of everyone."

Designed for plug-and-play operation and easy portability, Iomega's new Media Xporter Drive features a rugged 2.5 inch portable hard drive that requires no external power supply -- just connect its USB 2.0 "Y" cable to two available USB 2.0 ports on the Xbox 360 or PlayStation 3. The Media Xporter drive natively supports PlayStation 3 and Xbox 360 compatible formats such as MP3, MPEG-4 and JPEG, and it also comes with video conversion software to convert additional video file formats into compatible game console formats. Prism Video Converter MX software can be downloaded free of cost to convert input files in formats such as QuickTime, AVI, VOB and others, into MPEG-4 files that are playable by the game consoles.

"The new Media Xporter Drive is a total solution from Iomega that includes software to convert most kinds of video formats for use with an Xbox 360 or PlayStation 3," continued San Jose. "That means a game console can run an entire media library, be the family video and photo viewer, not to mention run favorite music playlists. The Iomega Media Xporter Drive makes home entertainment accessible and portable in a way that's fresh and relevant for today's home gamer."