Posted on Wednesday, Apr 23 2008 @ 20:53 CEST by Thomas De Maesschalck
Here's something I didn't really expect from Dell: a computer with a bamboo case.

Said to be Dell's smallest-ever computer, the machine is 81 percent smaller than a standard desktop and uses 70 percent less power. There's no word on what's inside yet, but Dell says the machine is due to be released later this year, and should cost between $500 and $700. 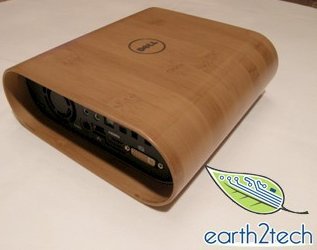 Dell isn't the only one with bamboo computers. Asus already showed off some bamboo concepts at trade shows and is rumoured to release a series of bamboo notebooks in June.