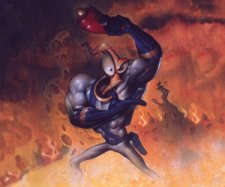 My favorite earthworm is making a comeback! Bit Tech reports Earthworm Jim will get a new game, a new cartoon series and even a feature-length movie.

Doug TenNapel, the original creator of the character, was in the spotlight particularly today as he signed a deal to take over the role of ‘Creative Consultant’ for future Earthworm Jim projects.

This isn’t the first time that an animated series based around the character has been developed though – in 1995 two seasons of the show ran on the WB! Network, with Dan Castellleneta voicing the titular character.

TenNapel himself, who also created the abstract cult favourite The Neverhood, has had a famously turbulent relationship with the Earthworm Jim franchise.

“They're supposed to pay me a minimum royalty on every Jim thing sold but Interplay's lawyers have loop-holed their way around having to pay me a cent," said TenNapel in an old interview. In fact, that interview is well worth a read and describes how credit for the gaming icon has been stripped from TenNapel over time as he was forced off the project.