Last week we showed you the world exclusive pictures of Gigabyte’s EP45 Extreme and this week we thought we’d follow up with some more P45 motherboards from Gigabyte. First up we got the EP45-DQ6 which will be Gigabyte’s flagship P45 based motherboard and unlike the Extreme, this is a normal retail board targeting high-end users looking for something out of the ordinary. It can’t compete with the Extreme when it comes to chipset cooling, but it has a fair few extra features that you won’t get with the Extreme board. 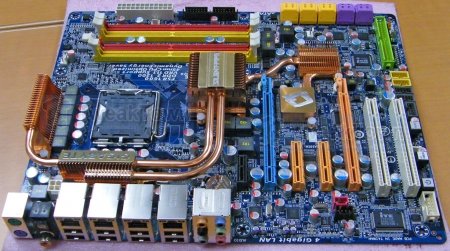