Posted on Friday, May 02 2008 @ 00:10 CEST by Thomas De Maesschalck
Nordic Hardware published specifications of the upcoming Asus P5Q3 Deluxe motherboard. This product is based on the Intel P45 chipset and features 16-phase power for the processor, 3-phase for the Northbridge and 3-phase for the memory.

The board has three physical PCIe x16 slots, whereof two are native x16 directly linked to the northbridge, while the third sports 8x bandwidth. If you're into overclocking, using exotic cooling, you're going to love the next little feature.

ASUS has added two small jumpers to the board, which unlocks more voltage for the CPU. At default positions, you will have access up to 1.9V in the BIOS, when you move the two jumpers you can feed the processor as much as 2.3V (!). Thanks to the EPU-6 Engine, power consumption will still be lower than with other motherboards.

P5Q Deluxe has a new version of Express Gate, which also supports photographs. Drive Xpert for easy RAID configuration as the drivers are already available on-board. Just plug in two drives and run. No hassle with floppys or anything. WiFi AP@n, lots of SATA and USB ports, one PATA port, 8 channel HD audio, two PCI ports, two PCIe x1 ports, and much more. 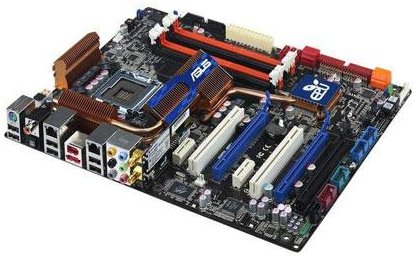