Posted on Friday, May 02 2008 @ 13:05 CEST by Thomas De Maesschalck
ThermalTake has launched a new CPU cooler for computer enthusiasts, the ThermalTake MaxOrb Ex. This HSF features a mirror-like copper base, six copper heatpipes and copper/aluminum fins. The MaxOrb Ex has a large 120mm blue LED fan that moves 86.5CFM of air at a noise level of 16-24dBA.

The cooler weighs 580g and is compatible with all the latest platforms from AMD and Intel. 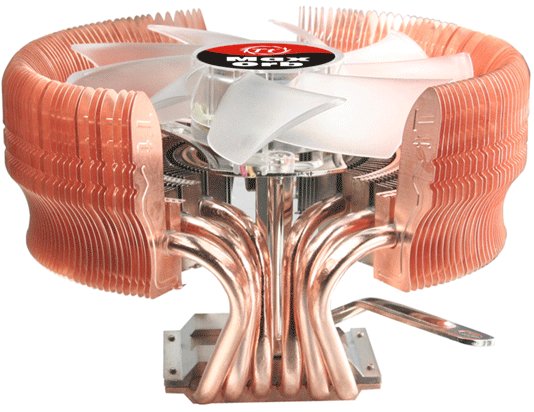 I'm not sure what they've been smoking but according to a ThermalTake manager the heatsink design is inspired by the Chinese temple of heaven:

“The industrial design concepts of MaxOrb EX comes from the idea of Chinese temple of heaven, we want the whole design to show the lofty spirit of the highest standards in the thermal field.” said by Thermaltake Industrial Design Manager, Bob Chung.