The 17" primary display has a 8ms response time and the notebook also has a secondary SideShow display. At 4.8kg the G70 is rather heavy but that should not really be a problem as this notebook isn't designed for road warriors.

Dual Graphics Engine
At the pinnacle of performance in a portable platform, the G70 features not one but two independent Nvidia 8700M GT graphics engines. Operating in parallel via SLI technology, and equipped with 1024MB GDDR3 of dedicated physical memory, the G70 is built to please the hardcore gamers with unparalleled fluid, stutter-free actions.
Dual Hard Disk
The G70 has enough drive bays to accommodate two hard disks, for a combined mass storage capacity up to 640GB. Not only is this more than ample storage for one’s media library, it is also an additional option to separate gaming content from other media and files.

Dual Core CPU
Powering the G70, is a choice of Intel Core 2 Duo, and Core 2 Extreme processors, the latter being Intel’s highest performance CPUs. For user friendliness, the G70 features ASUS Direct Console software with which the user can manage the G70’s many features and even select CPU performance levels between Standard, Turbo and Turbo Extreme. In concert with ultra fast dual core processor, dual graphics engine and dual hard drive storage, the G70 has been tested to achieve 3DMark 2006 score of 8,116 (Vista Ultimate 32-bit, 1024x768) and 8,208 (Vista Ultimate 64-bit, 1024x768).

Dual Sound Power
To complete the high-definition suite, the G70 is equipped with top-notch audio features including, Dolby Home Theater and Altec Lansing speakers. A total of 4 speakers are built-in and strategically placed at 4 corners of the notebook for the best 3-D surround effects. In addition, the front speakers have flashing lights that change colors with sound volume variation for an animated enhanced game ambience.

Dual Support Hardware
The G70 is not only about power, it is also in making that power useable. Gamers who are accustomed to operating high performance desktop systems will appreciate the G70’s dual cooling fans. Added convenience is provided by dual mode touch pad that also provides easy access to multimedia controls as well as additional hotkeys (including a four-way key) that can be configured for a tailored gaming experience.

Emotive Design
Every inch of the G70 is designed to match the spirit of gaming; with hexagonal and aluminium effect textures, the G70 evokes high performance similar to that of a sports car. These design flourishes are complemented by interactive LED lighting system arrayed strategically placed around the casing of the G70 that is not only attractive but informative as well. For instance, LED lights at the rear of the unit change colour with fan speed, and that on the side of the display can be configured to flash when the CPU is under load. 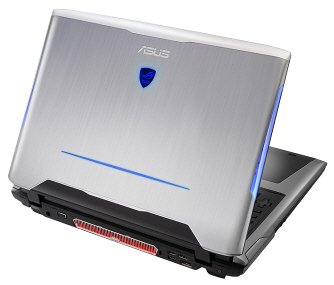