NVIDIA APX 2500 to give Windows Mobile a boost

Posted on Thursday, May 08 2008 @ 18:14 CEST by Thomas De Maesschalck
By the end of this year and early next year we can expect the first handsets with NVIDIA's APX 2500. This chip has been build from scratch to ensure it uses as little power as possible and offers a lot of functionality. The power consumption is so little that devices with the APX 2500 will be able to playback 720p HD video for up to 10 hours and the built-in HDMI support will make it possible to watch the video on your TV.

CNET saw a prototype from NVIDIA and says this chip could give a big boost to Microsoft's Windows Mobile platform:

The platform that Nvidia is demonstrating goes far beyond the staid, pin-striped Windows Mobile that is used today. Nvidia is showing finger-flick-and-roll screens and accelerometer-based reorienting 720p video.

These tiny devices are designed to run 720p HDTV video for 10 hours--one of the marquee features that Nvidia will be emphasizing, Rayfield said. He plugged a prototype APX 2500-based device into a large screen TV via a High-Definition Multimedia Interface (HDMI) connector and played high-definition movies with the same fluidity and resolution as you get from a big HDTV box or bigger computer.

All on, believe it or not, Windows Mobile. The operating system has struggled since its inception back in 2000. Initially, it had promise on Compaq (and later Hewlett-Packard) iPaq handhelds, but these devices never appealed to a large base, even in corporate America which eventually went en masse for the Blackberry. There is more acceptance now as Windows Mobile 6.1 is adopted by companies like HTC, Samsung, and Acer (which announced its intention to bring out a Windows smartphone)--but it is still Windows. In a post-iPhone world, Nvidia says this is not adequate. 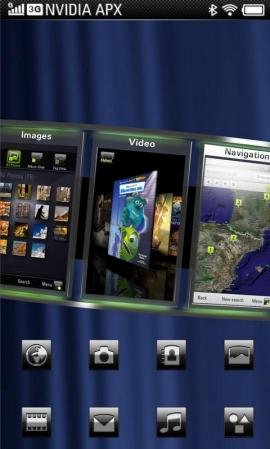