Posted on Tuesday, May 13 2008 @ 22:53 CEST by Thomas De Maesschalck
Microsoft unveiled its WorldWide Telescope, this is a free web-based application that allows you to explore the universe. This tool features terabytes of imagery from the best ground- and space-based observatories around the world.

“The WorldWide Telescope is a powerful tool for science and education that makes it possible for everyone to explore the universe,” said Bill Gates, chairman of Microsoft. “By combining terabytes of incredible imagery and data with easy-to-use software for viewing and moving through all that information, the WorldWide Telescope opens the door to new ways to see and experience the wonders of space. Our hope is that it will inspire young people to explore astronomy and science, and help researchers in their quest to better understand the universe.”

The application itself is a blend of software and Web 2.0 services created with the Microsoft high-performance Visual Experience Engine, which allows seamless panning and zooming around the heavens with rich image environments. WorldWide Telescope stitches together terabytes of high-resolution images of celestial bodies and displays them in a way that relates to their actual position in the sky. People can freely browse through the solar system, galaxy and beyond, or take advantage of a growing number of guided tours of the sky hosted by astronomers and educators at major universities and planetariums.

“WorldWide Telescope brings to life a dream that many of us in Microsoft Research have pursued for years, and we are proud to release this as a free service to anyone who wants to explore the universe,” said Curtis Wong, manager of Microsoft’s Next Media Research Group. “Where is Saturn in the sky, in relation to the moon? Does the Milky Way really have a supermassive black hole in the center of the galaxy? With the universe at your fingertips, you can discover the answers for yourself.”

The service goes well beyond the simple browsing of images. Users can choose which telescope they want to look through, including the Hubble Space Telescope, the Chandra X-Ray Observatory Center, the Spitzer Space Telescope or others. They can view the locations of planets in the night sky — in the past, present or future. They can view the universe through different wavelengths of light to reveal hidden structures in other parts of the galaxy. Taken as a whole, the application provides a top-to-bottom view of the science of astronomy.

“Users can see the X-ray view of the sky, zoom into bright radiation clouds, and then cross-fade into the visible light view and discover the cloud remnants of a supernova explosion from a thousand years ago,” said Roy Gould, a researcher at the Harvard-Smithsonian Center for Astrophysics. “I believe this new creation from Microsoft will have a profound impact on the way we view the universe.”

Microsoft Research has formed close ties with members of the academic, education and scientific communities to make WorldWide Telescope a reality. NASA along with other organizations coordinated with Microsoft Research to provide the imagery, provide feedback on the application from a scientific point of view, and help turn WorldWide Telescope into a rich learning application.

Microsoft’s mission to make the universe accessible to everyone was begun years ago by renowned Microsoft Senior Researcher Jim Gray. WorldWide Telescope is built on top of Gray’s pioneering development of large-scale, high-performance online databases including SkyServer and his contributions to the Sloan Digital Sky Survey, a project to map a large part of the Northern sky outside of the galaxy. Microsoft Research is releasing WorldWide Telescope as a service free of charge to the astronomy and education communities as a tribute to Gray with the hope that it will inspire and empower kids of all ages to explore and understand the universe in an unprecedented way. 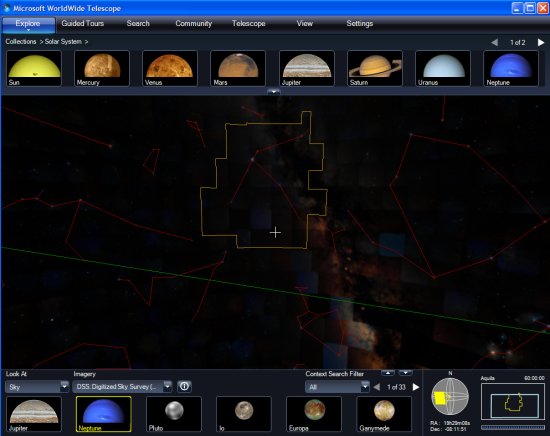