Nanohealing stops bleeding almost at once 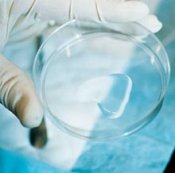 Arch Therapeutics, a Cambridge, MA startup, has developed a new nanostructured material that can stop bleeding within a few seconds. The material is called synthetic peptide and it was discovered at MIT in the early 1990s but it wasn't until a few years ago that researchers discovered its potential for stopping bleeding.

The first application, pending Food and Drug Administration approval, will be for use during surgery to quickly stop bleeding and even prevent it in the first place. Floyd Loop, currently an advisor to Arch Therapeutics, and formerly a cardiovascular surgeon and the head of Cleveland Clinic, says that it could be useful in a wide variety of surgeries, including brain, heart, and prostate. For example, he says that when large tumors are removed, "there's a lot of diffuse bleeding around the site, and you have to spend a lot of time with sponges and cautery stopping it."

Loops says that in addition to saving time, which can improve the outcome of a surgery, the material could decrease the need for transfusions and reoperations to control bleeding. What's more, it could reduce the risk of infection. It could be used, for instance, to prevent leakage after bowel-repair surgery. "I've never seen anything like it," Loop says.

Eventually, the material could be used by first responders to stop bleeding at accident sites and on the battlefield. It has a long shelf life, which makes it attractive for use in first-aid kits. It's also easily broken down by the body, so it doesn't have to be removed, unlike other agents for stopping blood flow. However, Loop cautions that further tests are needed to confirm that the material will work in nonsurgical applications.