Posted on Sunday, May 25 2008 @ 22:30 CEST by Thomas De Maesschalck
CNET says it's still too early to conclude which console will win the current-gen console war, analysts believe the console landscape still has a lot of change to go. Take it with a grain of salt but some analysts believe the Wii will remain the best-selling console, until the PlayStation 3 takes the lead in 2012 or so. IDC analyst Billy Pidgeon believes the Xbox 360 will be the loser with sales of only just over 40 million by 2012.

In a report issued earlier this year, IDC analyst Billly Pidgeon projected sales numbers for the three next-gen consoles, through 2012.

In the shorter term, however, IDC suggested that the Wii is poised to be the dominant console, most likely overtaking the Xbox this year in total sales.

"Our forecast calls for the Wii outshipping the Xbox 360 and the PS3 through 2010," Pidgeon wrote.

To some, the big shock in Pidgeon's report is that the Xbox 360 will have fallen far behind by 2012, with just over 40 million units sold.

To Pachter, these predictions have the ring of truth. 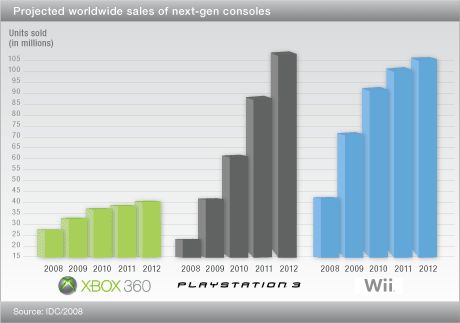 Analysts also expect both Microsoft and Sony will cut their prices between now and the 2009 holiday season to boost sales. More info over here.