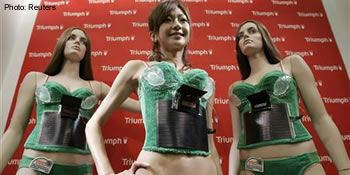 For the weirdest gadgets you definitely need to go to Japan. Lingerie maker Triumph International Japan unveiled a new solar-powered bra last week that can charge your cell phone or an iPod.

The panel requires light to generate electricity and the concept bra will not be in stores anytime soon, said Triumph spokeswoman Yoshiko Masuda, as "people usually can not go outside without wearing clothes over it."

But it does send the message of how lingerie could possibly save the planet, Masuda said, adding that the bra should not be washed or sunned on a rainy day to avoid damaging it.

Being eco-friendly is now fashionable in Japan, and the "Solar Energy Bra" follows the company's other green-themed undergarments that include a bra that turns into a reusable shopping bag and one that featured metal chopsticks to promote the use of reusable chopsticks.

I'm not sure how eco-friendly these bras really are. Photovoltaic cells don't grow on trees, it's a pretty polluting industry.