Posted on Tuesday, May 27 2008 @ 07:35 CEST by Thomas De Maesschalck
LG has presented a new LCD display technology that can display different images on the front and back sides of the glass substrate:

Two major modifications were made to display images on both sides. First, a new reflective layer is arranged in the color filter substrate. When the images are viewed from the TFT array substrate side, the layer reflects incoming light. On the other hand, when viewed from the side of the color filter as in the case of the existing LCD panels, the light is reflected by the reflection electrode formed on the TFT array.

Another major improvement relates to the structure of the TFT array. The company formed two transistors in one pixel in order to display different images on both sides of the panel.

LG Display reportedly prototyped 2.2- and 15-inch LCD panels with the new structure. Both panels feature a reflectivity of 20%. The 2.2-inch prototype has a resolution of 160 x 120 and an aperture ratio of 43%, according to the company. The RGB three colors are arranged in a stripe pattern.

The 15-inch prototype reportedly has a resolution of 2048 x 1536 and an aperture ratio of 46%. It employs a sub-pixel arrangement with four colors, consisting of R, G and B and the additional white (W) 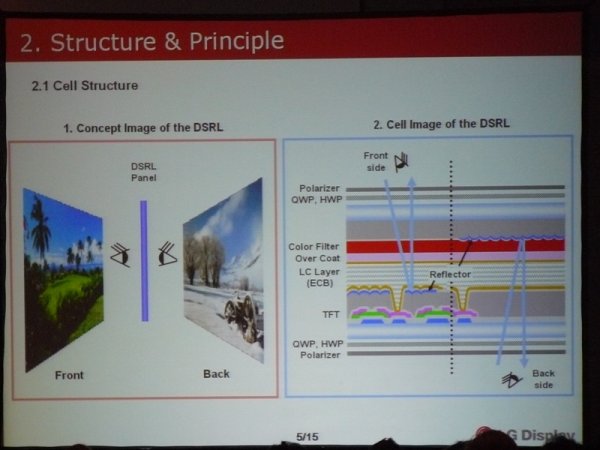