Posted on Tuesday, May 27 2008 @ 21:21 CEST by Thomas De Maesschalck
Apacer unveiled new 1600MHz and 1800MHz DDR3 CL7-7-7-20 2GB memory modules with active cooling. Both modules ship with a quite odd looking cooling module that, according to Apacer, lowers the module' temperature by over 15°C.

The special features of the Aeolus Active / Dual layer Heat Spreader 1.A unique built-in, low-noise fan: Unlike most memory modules currently on the market, which use passive heatspreader, the Apacer Aeolus active heatspreader overclocking memory module incorporates a built-in, low-noise fan that reduces the temperature by over 15ï‚°C. The air currents created by the fan do not directly touch the memory module itself, eliminating the risk that dust particles drawn in with the air might build up on the module surface, which could affect heatspreader performance.

2.A revolutionary dual-layer heatspreader: The Apacer Aeolus is the first overclocking memory module to feature a dual-layer heat sink. The adoption of this dual-layer architecture creates a heat dissipation surface over 70% larger than that of a traditional single-layer heat sink, enabling a significant improvement in the speed with which heat is dissipated. 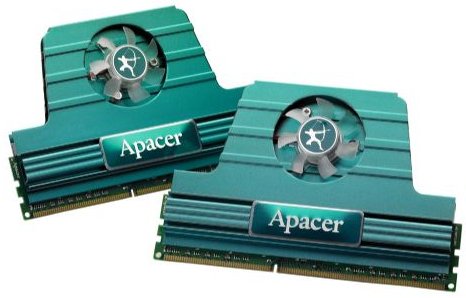