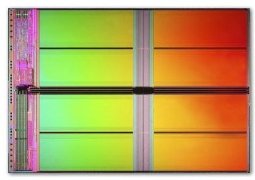 This process technology was jointly developed by Intel and Micron and manufactured by the companies’ NAND flash joint venture, IM Flash Technologies (IMFT). It is the smallest NAND process geometry on the market. The 32 Gb NAND chip is the only monolithic device at this density that fits into a standard 48-lead thin small-outline package (TSOP), providing a cost-effective path to higher densities in existing applications. Shipments of customer samples begin in June and mass production is expected during the second half of this calendar year.

The 34nm 32 Gb chips will be manufactured on 300 millimeter wafers, each producing approximately 1.6 terabytes of NAND. Measuring just 172mm², less than the size of a thumbnail, the 34nm 32 Gb chip will cost-effectively enable high-density solid-state storage in small form factor applications. The 34nm 32 Gb chip was designed with solid-state drives in mind. The product will enable more cost-effective SSDs, instantly doubling the current storage volume of these devices and driving capacities to beyond 256 GBs in today’s standard, smaller 1.8-inch form factor. SSDs are becoming the new storage medium for notebook computers, providing lower power, faster boot-up time, increased reliability, improved performance and reduced noise than hard disk drives. With the innovations in NAND process technology, such as with the 34nm NAND process, SSDs now offer a significant range of capacities to meet market requirements.