Posted on Monday, Jun 02 2008 @ 22:58 CEST by Thomas De Maesschalck
Craig Raymond talks about the upcoming Asus M51VA notebook which features a Penryn P8600 2.4GHz processor. This notebook features the Centrino 2 "Montevina" platform and Raymond published some snips on how it's like to game on this notebook via WiMAX:

When WiMAX ships with Centrino 2 later this year, no add on card required, the Echo Peak mini-card hidden under the hood (like the one inside this Asus) promises the “always on” connection we’ve been lusting for. And now my Fitel WiMAX connection serves up a steady stream of bits while I leisurely stroll with it around the TICC to put it through the paces. How’s the streaming video, you ask? Kobe looked pretty good scoring 39 to put the Lakers in the NBA finals from my Slingbox back in the States (place/time-shifting, oh how I love thee). Skype rings clear as a bell, except maybe for the drowning concert of scooter horns that screech from the busy Taipei traffic. But online gaming over a live carrier network has long been my holy grail around WiMAX. Here from my outside park bench, after downloading my Warcraft client, I’m able log into the game world to slay all manner of goblins and over sized gerbils. It’s not the raw speed I’m looking for in this scenario, but the responsiveness, so my game character isn’t cut to ribbons by a rabid squirrel while he scratches his head awaiting the next delivery of network packets to tell him to run the hell out of there (cough 3G cough).

The best part of it all? It feels like WiFi, but I’m outside, and I can’t even SEE a Starbucks from where I’m at. Freedom!!! Only thing I have to worry about is the rain. 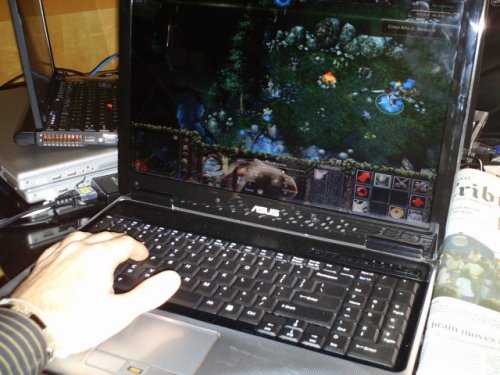