AMD has Turion X2 based UMPC

This super tiny machine didn’t quite manage to squeeze in a full QWERTY layout keyboard, but it’s near enough. Rather than using a standard touch pad or a track point it used a tiny metal touch pad that didn’t seem overly responsive, but it also had a touch screen display just in case.

What’s really amazing is that AMD quoted us a battery life of about 2.5h for video and over 3h of office usage, off a single cell battery. Feature wise it’s not too bad either with 1GB or RAM of which some is shared with the integrated ATI graphics.

It also has three USB 2.0 ports, a mini FireWire port, a front mounted memory card reader, a D-sub connector and a built in webcam of some sort, a headphone and mic jack and of course WiFi and Bluetooth. 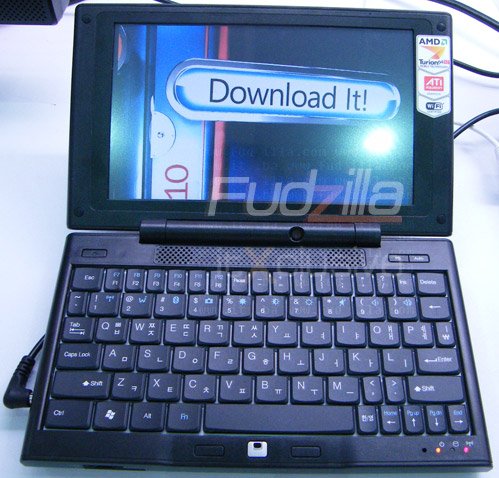