Posted on Wednesday, Jun 04 2008 @ 01:10 CEST by Thomas De Maesschalck
Theo Valich from TG Daily tested a multi-touch LCD display from Albatron at Computex and says he's impressed. He was told displays with this technology would be about 20 percent more expensive than regular LCDs.

It is easy to overlook the truly exciting products at Computex due to the flood of rather common things at the show. After day one of the show, we found that the probably most stunning product on the show floor comes from Albatron. This motherboard and graphics maker may not be the first name that comes to you mind when you are thinking about LCD displays, but we have to admit that the company’s new LCDs reveal a whole new level of interactivity on your PC.

Imagine Apple’s iPhone display on a large scale: Albatron integrated sensors on both sides of the touchscreen display. Robert Doncevski, sales director at Albatron, demonstrated the screen and its features to us and as far as we could see, controlling an operating system is a breeze. You simply only use your fingers to start and close applications. Bill gates’ demonstration may have been rather underwhelming, but seeing a multi-touch LCD actually in front of us made it clear that this technology works much better than we expected. Playing around with Google Earth was a blast. 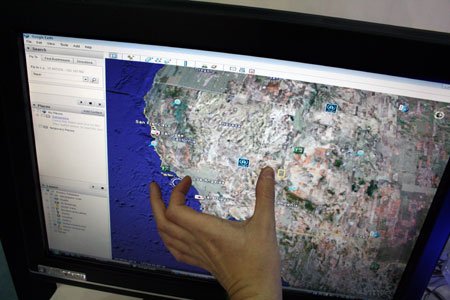