Posted on Thursday, Jun 05 2008 @ 03:01 CEST by Thomas De Maesschalck
DailyTech caught a glimpse of a GeForce 9300 based motherboard at Zotac's booth at Computex. This motherboard features one of the first NVIDIA chipsets that brings Hybrid SLI to the Intel platform.

Zotac showed new motherboards today at Computex like the GeForce 9300. This board is special because it is the first Intel board from NVIDIA that features the new Hybrid SLI, GeForce Boost and Hybrid Power features NVIDIA has been talking up since CES. NVIDIA is expected to reveal more details about the GeForce 9300 architecture later this Summer.

The board supports Intel processors up to the Core 2 Extreme with a 1333MHz FSB. Users can run up to 8GB of DDR2800 RAM and integrated outputs include VGA, DVI and DisplayPort. The board uses a Micro ATX form factor. 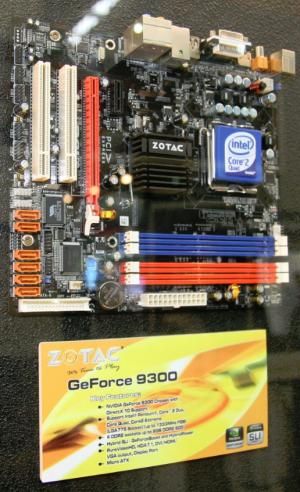