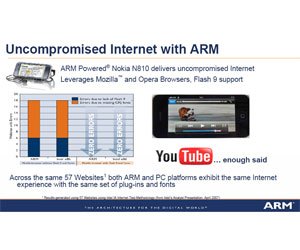 Ian Drew, Vice President of Marketing at ARM, said yesterday that the Internet doesn’t need x86 to work with no compromises after pointing out that the problems Intel picked up on are now fixed after the processor maker established ties with Mozilla, Adobe and Opera.

During the Intel Developer Forum in Shanghai, Intel highlighted 57 high-profile websites that were error-ridden on an ARM-based device and the reason cited for this was “because the Internet was developed on x86.”

Considering the fact that ARM doesn’t own an x86 licence, it took issue with this and worked to fix the problems with its architecture – the errors no longer exist and Drew claimed that an ARM-based device gives “about the same Internet experience as an x86 platform.”