These so-called 3-D chip stacks – which take chips and memory devices that traditionally sit side-by-side on a silicon wafer and stacks them together on top of one another -- presents one of the most promising approaches to enhancing chip performance beyond its predicted limits. This follows IBM’s leadership in advancing chip-stacking technology in a manufacturing environment a year ago, which shortens the distance information on a chip needs to travel by 1000 times, and allows for the addition of up to 100 times more channels, or pathways, for that information to flow compared to 2-D chips.

“As we package chips on top of each other to significantly speed a processor’s capability to process data, we have found that conventional coolers attached to the back of a chip don’t scale. In order to exploit the potential of high-performance 3-D chip stacking, we need interlayer cooling,” explains Thomas Brunschwiler, project leader at IBM’s Zurich Research Laboratory. “Until now, nobody has demonstrated viable solutions to this problem.”

3-D chip stacks would have an aggregated heat dissipation of close to 1 kilowatt—10 times greater than the heat generated by a hotplate—with an area of 4 square centimeters and a thickness of about 1 millimeter. Moreover, each layer poses an additional barrier to heat removal.

Brunschwiler and his team piped water into cooling structures as thin as a human hair (50 microns) between the individual chip layers in order to remove heat efficiently at the source. Using the superior thermophysical qualities of water, scientists were able to demonstrate a cooling performance of up to 180 W/cm2 per layer for a stack with a typical footprint of 4 cm2.

“This truly constitutes a breakthrough. With classic backside cooling, the stacking of two or more high-power density logic layers would be impossible,” said Bruno Michel, manager of the chip cooling research efforts at the IBM Zurich Lab. 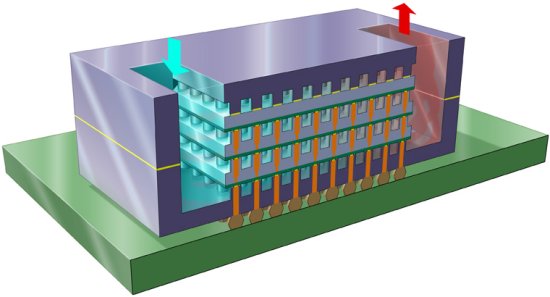