Posted on Monday, Jun 09 2008 @ 20:34 CEST by Thomas De Maesschalck
Noctua unveiled an alpha prototype of its "Sandwich" CPU cooler at Computex. The Austrian cooling firm promises this "next generation super-cooler" will offer superior cooling performance and says it uses a 6 heatpipe design. There's also something special about the core of this CPU cooler but Noctua would like to keep this feature confidential..

Last but not least, we've presented a prototype of our upcoming top-of-the-line retail CPU cooler: codename 'Sandwich'. The alpha stadium dummy sample on display doesn't show the confidential core feature of the cooler yet, but it will give you a basic idea of the cooler's 6 heat-pipe design. 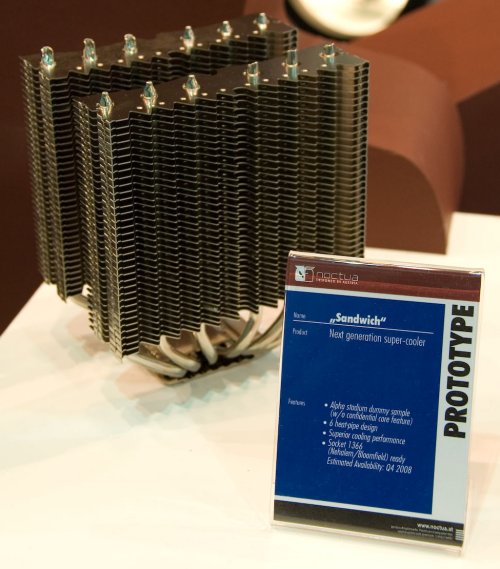 The Noctua "Sandwich" cooler will be available in Q4 2008 and supports Nehalem's new socket.