Sharkoon is expanding its line-up of inexpensive, external hard drive enclosures. Until now the Sharkoon Rapid-Case series has only been available for 3.5" hard drives, but is now available for 2.5" notebook sized hard drives as well. Under the name Rapid-Case 2.5", models are available for both IDE and SATA hard drives - each version is available in red, blue and black metallic paint schemes. Both versions connect to PCs and laptops via the USB 2.0 interface.

The sturdy hard drive enclosure is made from aluminium, which functions as a passive heatsink, and the enclosure serves perfectly for flexible data transport. Installation is accomplished in a few simple steps. Included in the packaging are a USB-Y cable (2x A / Mini-USB), installation screws, screwdriver and a transport bag.

Sharkoon says the Rapid-Case 2.5" units should be available in Europe for 10EUR (IDE) and 13EUR (SATA)) 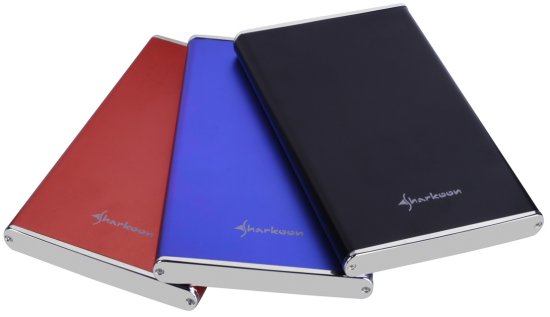