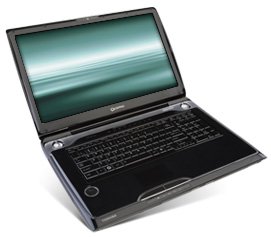 The Qosmio G55 is the world’s first laptop to incorporate a parallel media co-processor, which is based on the revolutionary Cell processor(1) technology co-developed by Toshiba, Sony and IBM. This technology is best known for its use within the popular Sony PlayStation® 3 and various supercomputers. Branded as the TOSHIBA Quad Core HD Processor, users have more power than ever to control and create personal movie projects with unmatched speed and efficiency. Additionally, the Qosmio G55 sports up to 500GB of hard drive storage space, and is the first laptop from Toshiba to include an expansive 18.4-inch diagonal widescreen TruBrite® high-definition display sporting a true 16:9 aspect ratio that’s perfect for serious filmmakers.

As high-definition digital camcorders become more affordable, people quickly learn that video editing is a time-intensive process. Video often must be converted from the camcorder’s format into one the editing software understands (called transcoding). Burning the video onto a DVD requires reducing the resolution to standard-definition and then transcoding the final product to a DVD Video MPEG2 format. A 10-minute video can take an hour or more to transcode using a high performance processor. Offloading that work from the CPU to the TOSHIBA Quad Core HD Processor boosts the transcoding speed up to 10 times(2) faster. The Toshiba DVD Player software also takes advantage of this extra performance, upscaling DVD video to high definition.

The Qosmio F55 with its 15.4-inch diagonal widescreen TruBrite high-definition display is a worthy gaming machine that also takes mobility seriously. Sporting gaming grade NVIDIA GeForce 9700 GTS graphics users can enjoy a fluid and impressive gaming experience. Toshiba’s first laptop with a built-in GPS receiver and Garmin™ mapping software, the Qosmio F55 frees users from the need for an Internet connection when searching for millions of points of interest, as the built-in GPS system empowers users to determine their exact location in relation to their destination within moments.

Beyond the laptops, the new Qosmio family has the power to be extended into the living room through REGZA LINK™ HDMI technology. This standard feature enables simultaneous instant device configuration, and the ability to control REGZA LINK enabled devices, such as Toshiba’s REGZA™ HDTVs and a Qosmio laptop with a single remote.

Adding to their quality appeal, the Qosmio X305, Qosmio G55 and Qosmio F55 feature several prominent design characteristics that magnify the cutting-edge nature of the series. Each Qosmio sports a striking new chassis design and Fusion™ finish, Feathertouch multimedia buttons, a flush-mounted Touchpad, a high-speed eSATA port and Harman® Kardon high-fidelity bass reflex speakers with a built-in sub-woofer. These features do much to enhance the overall quality and premium feel of the new Qosmio series.