Posted on Thursday, June 19 2008 @ 2:25 CEST by Thomas De Maesschalck
HardwareZone has some coverage of Google's upcoming Android platform which was previewed by Andy Rubin of Google's Mobile Platforms group:

Besides being free, being open source also means that applications that are developed for the Android platform will be freely available to everyone (though whether you would have to pay for the application itself will be left to the developers). The application distribution method isn't exactly confirmed as yet and Mr Rubin was pretty shy on revealing details, but he did say the download ranking system would involve something similar to Youtube's star rating system, and would also have other requirements such as number of downloads and number of uninstalls to determine the application's ranking.

Right now, you're probably wondering who's on board the Android express, well, Google's part of the Open Handset Alliance, which comprises of around 34 big name companies around the world like Intel, HTC, LG, Samsung and more. Most of you, we're sure, are familiar with these brand names and you'll be interested to know that the handset manufacturers such as HTC and Samsung will debut their Android-based mobile phones soon.

While we can't provide pictures of the actual handset that was used for demo purposes to showcase the applications that Google showed us, we do have some screenshots of the applications running, and based on what we've seen on the demo unit, Android looks to be giving Windows Mobile and Apples iPhone operating systems a good run for their money.

Pictured below is the user interface of the Android platform: 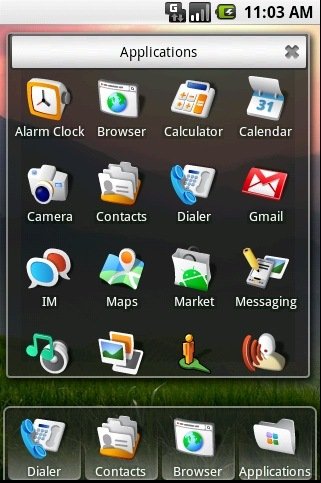