NVIDIA really took us by surprise with their 55nm GeForce 9800 GTX+, two days ago most people didn't know this card was coming and now many reviewers are working overtime to get the first previews out! Firingsquad is one of the first sites to publish a preview and it's a pretty interesting one as they've compared the card against the Radeon HD 4850, you can check out the full article over here.

In case you don't know it yet, the GeForce 9800 GTX+ is NVIDIA's first 55nm GPU, the card features a 55nm G92 GPU clocked at 738MHz, 1836MHz stream processors and 1.1GHz memory. The card will be available in July for $229 and the price of the original GeForce 9800 GTX will drop to $199. Firingsquad tested the card with the GeForce 175.19 drivers but says they're going to rerun the results as they also got their hands today on the newer 177.39 driver which adds PhysX support.

Firingsquad's test results unveil the GeForce 9800 GTX+ has the edge over the Radeon HD 4850 by a good margin in most games but ATI has the advantage that their card is 10-15% cheaper and will be available a few weeks earlier. 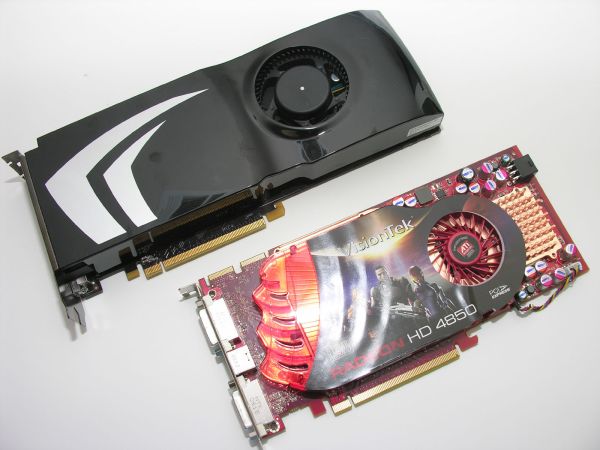