Posted on Saturday, Jun 21 2008 @ 00:26 CEST by Thomas De Maesschalck
Dice-size crumbs of bright material have vanished from inside a trench where they were photographed by NASA's Phoenix Mars Lander four days ago, convincing scientists that the material was frozen water that vaporized after digging exposed it.

"It must be ice," said Phoenix Principal Investigator Peter Smith of the University of Arizona, Tucson. "These little clumps completely disappearing over the course of a few days, that is perfect evidence that it's ice. There had been some question whether the bright material was salt. Salt can't do that."

The chunks were left at the bottom of a trench informally called "Dodo-Goldilocks" when Phoenix's Robotic Arm enlarged that trench on June 15, during the 20th Martian day, or sol, since landing. Several were gone when Phoenix looked at the trench early today, on Sol 24.

Also early today, digging in a different trench, the Robotic Arm connected with a hard surface that has scientists excited about the prospect of next uncovering an icy layer. 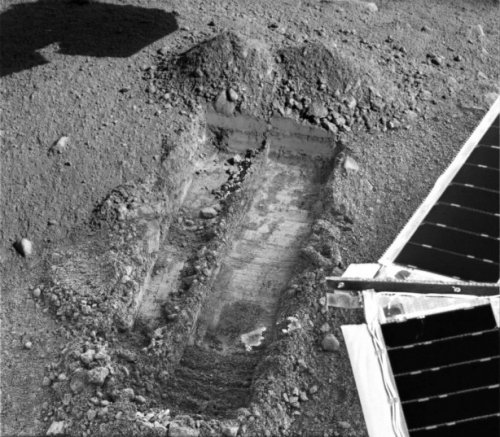