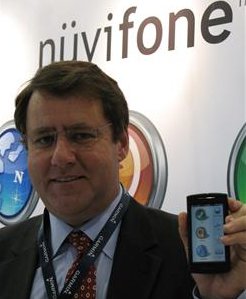 Industry sources claim Garmin's Nuvifone will be manufactured by Asus.

Roger Jollis, Garmin's director of OEM and mobile marketing, said Garmin had placed strong emphasis on its own vertical integration, and had never outsourced its products.

But as handsets involve a lot of validation work and RF technology expertise, Garmin started developing the Nuvifone in collaboration with a Taiwan maker, which will also be the manufacturer of the handsets, he said, adding it is the first time that Garmin has outsourced its products.

Jollis declined to identify the manufacturing partner. But industry sources pointed out Asustek has been working with Garmin for two years on the project, with the Taiwan-based maker chiefly contributing its know-how in RF technologies.

Although Asustek has already spun off its contracting manufacturing arms, it remains in charge of the partnership with Garmin for Nuvifone, the sources said.

The Garmin Nuvifone will be available in Q4 2008 and the company has plans for other handsets too.