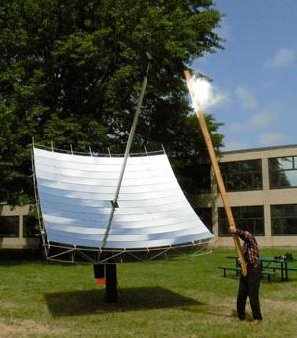 MIT students have developed a new type of parabolic solar dish that has enough to melt steel!

However, parabolic collectors are still a relatively new field of research. Their true potential remains relatively unknown. A glimpse of it was provided by a research team at MIT, which developed a new parabolic collector design, which will blow away current solar power designs in terms of efficiency.

The MIT team believes that their lightweight, inexpensive device holds the promise of revolutionizing the power industry and providing solar power to even remote regions.

The key piece is the 12-foot dish, which the team assembled in several weeks. The design is exceedingly simple and inexpensive. The frame is composed of aluminum tubing and mirrors are attached to it.

The results are staggering -- the completed mirror focuses enough solar energy at its focal point to melt solid steel. The energy of typical sunlight is concentrated by a factor of 1,000. This was showcased during a demonstration, in which a team member held up a board, which instantly and violently combusted, when brought within range of the focal point.

By directing the dish at a more practical target -- water piped through black tubing -- steam can be flash created, offering instant means of producing energy or providing heating.