Posted on Monday, Jun 30 2008 @ 23:40 CEST by Thomas De Maesschalck
TG Daily believes AMD is getting back on track. The site has some information about the performance of two R700 dual-GPU graphics cards in 3DMark Vantage and says these cards, along with the AMD Phenom 9950, should be available within the next seven weeks or so. Additionally, the firm is also working hard to get its 790GX chipset and SB700 and SB750 southbridges on the market.

On the product side, AMD wants to regain influence in the enthusiast market with affordable, but highly overclockable processors - such as the upcoming Phenom 9950. AMD is apparently shooting for a 12,000 CPU score in 3DMark Vantage. However, we were not able to get any specifics about the overclock required to hit this point. Since current Phenoms are checking in at less than 10,000 scores, we would expect a 20% higher clock rate.

However, looking at AMD’s more and more marketed “balanced platform” approach and the continuing advance of GPUs in everyday computing should put AMD into a much improved market position soon. 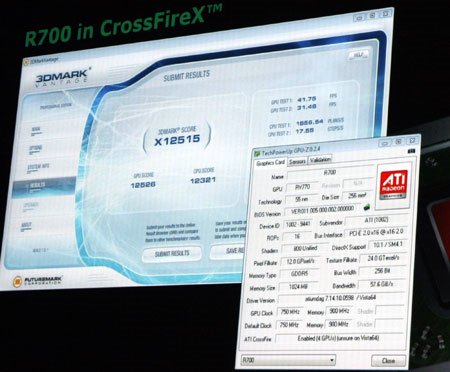