Posted on Thursday, July 03 2008 @ 1:14 CEST by Thomas De Maesschalck
Intel has unveiled a test version of a silicon photonics chip that can encode 200 gigabits of data per second on a beam of light, that's twice as much as today's fastest optical networks. The advantage of Intel's chip is that it's made out of silicon and thus a lot cheaper to manufacture than devices that use precious such as indium and gallium.

While silicon is the material of choice in the electronics industry, it has been overlooked in the photonics industry because its optical properties are inferior to those of other semiconductors. Silicon doesn't produce, detect, and manipulate photons as well as materials such as indium phosphide and gallium arsenide. But within the past few years, optical engineers have been giving silicon a second look and cleverly engineering around some of its natural limitations.

The new Intel test chip splits an incoming beam of light into eight channels. Within each channel is a modulator, a device that encodes data onto light. After the beams are encoded with data, they are recombined. In the tests, each modulator ran at a rate of 25 gigabits per second, and each performed nearly identically, says Mario Paniccia, director of the company's silicon-photonics lab. He notes that only one modulator was tested at a time but says that in a future paper his team will publish the results from running multiple channels simultaneously. The multiple channels could produce cross talk, electrical or optical activity that could hinder performance. However, preliminary results, Paniccia says, show that due to the design, cross talk is limited.

The team is now working on boosting the amount of modulators per chip to 25 and increasing the speed of each modulator to 40 gigabits per second. Intel hopes silicon photonics chips will make it to the market within three to five years. More info at Technology Review. 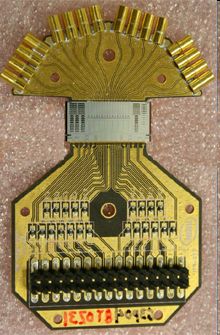