Posted on Friday, Jul 04 2008 @ 00:35 CEST by Thomas De Maesschalck
FUD Zilla took some photos of a ATI RV670 based external graphics card that will soon be released by Fujitsu Siemens:

We wrote that this external graphics has an RV670 based GPU or should we say that Lasso has M88 mobile version of the same GPU and it doesn’t get that hot after a few hours of work.

We were asked not to do any benchmarks but we saw how the retail unit looks and that it looks fine enough to start shipping shortly. This XGP actually supports PCIe 8X which is more than enough to run vista and for the time being, you can run Lasso 3D on an external monitor but at later time you will be able to play lasso accelerated games on your notebook display. 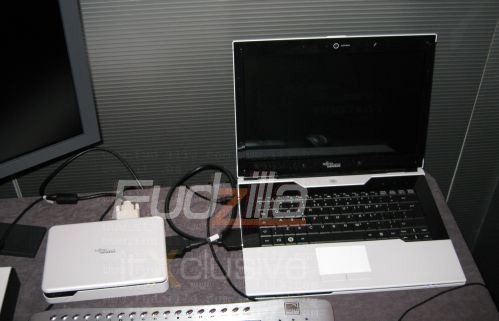