Posted on Tuesday, Jul 08 2008 @ 03:05 CEST by Thomas De Maesschalck
Last week a report by Tom's Hardware crushed the myth that SSDs use less power than HDDs but this week Laptop Mag concludes this isn't true. The site did a web surfing test with HDDs and SSDs and conclude solid state disks offer a bit more battery life.

As you can see, both SSDs lasted 3:23, exactly 10 minutes longer than the default hard drive. While 10 minutes out three hours is not a significant gain, it’s certainly not a loss. In other words, the SSDs we tested don’t use more battery life than traditional hard drives, at least not during Web surfing.

To be fair to Tom’s Hardware, most of the drives they tested were different than ours. They used a Crucial, an Mtron, a MemoRight, and a SanDisk SATA 5000. We also used the SanDisk SATA 5000 as one of our test drives, but that’s the only one our tests have in common. 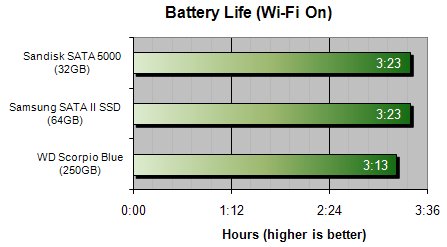