Posted on Wednesday, Jul 09 2008 @ 23:22 CEST by Thomas De Maesschalck
Samsung announced it's now mass producing 1.8" and 2.5" MCL-based solid state disks with 64GB and 128GB storage capacities. The drives have a read speed of 90MB/s and write speed of 70MB/s, it's definitely not the fastest on the market and even a bit slower than some HDDs but these drives should be a bit more affordable than the fastest SSDs.

Before we do that, let’s have a quick look at the specifications of the drives. Samsung claims that MLC based SSD has a write speed of 70 MB/s and a read speed of 90 MB/s, which are performance levels that are well below single-level-cell (SLC)-based SSDs which can achieve read speeds of 130 MB/s. In fact, Samsung’s new SSDs are even a bit slower than today’s fastest hard drive, WD’s 3.5” Velociraptor.

Samsung claims that the 128 GB SSD, which is built from 64 MLC NAND flash memory chips of 16 Gb each, is energy efficient at 0.2 watts in standby mode and 0.5 watts in active mode. Probably most interesting is the drive’s expected life: Samsung claims the drives will last 20 times longer than the average 4-5 years of hard drives – which would mean that the SSD is rated at 80-100 years.

So what about the price? Considering the fact that these drives are in mass-manufacturing, the fact that there is talk about “more attractive” pricing in an environment where entry-level 64 GB SSD notebooks can be purchased for about $1600 (check Dell) sounds to us like SSDs are finally ready to take a first shot at the upper mainstream segment of computers. This would mean that vendors such as Dell would have to drop the current $600 price of 64 GB substantially: Flash prices typically fall by about 40% every year and $300-$350 for a 64 GB drive sounds realistic to us. 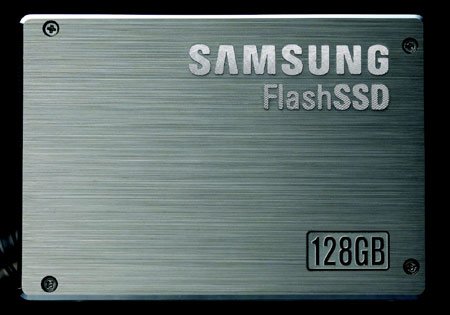