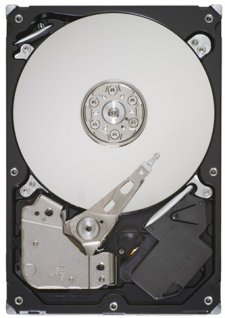 Seagate has released three new hard drives today. First up is the Barracuda 7200.11, this new desktop HDD offers an impressive storage capacity of 1.5TB and has a sustained data rate of up to 120MB/s. The 1.5TB HDD should be available in August.

The debut of the Barracuda® 7200.11 1.5TB hard drive, the eleventh generation of Seagate’s flagship drive for desktop PCs, marks the single largest capacity hard drive jump in the more than half-century history of hard drives – a half-terabyte increase from the previous highest capacity of 1TB, thanks to the capacity-boosting power of perpendicular magnetic recording (PMR) technology.

“Organizations and consumers of all kinds worldwide continue to create, share and consume digital content at levels never before seen, giving rise to new markets, new applications and demand for desktop and notebook computers with unprecedented storage capacity, performance and reliability,” said Michael Wingert, Seagate executive vice president and general manager, Personal Compute Business. “Seagate is committed to powering the next generation of computing today with the planet’s fastest, highest-capacity and most reliable storage solutions.”

Momentus 5400.6 and Momentus 7200.4 hard drives are the fourth generation of Seagate’s laptop family to use PMR. The Momentus 5400.6, a 5400-rpm drive, combines a powerful Serial ATA 3Gb/second interface and capacities ranging from 120GB to 500GB with an 8MB cache.

The Momentus 7200.4 hard drive, with its 7200-rpm spin speed and a Serial ATA 3GB/second interface, delivers true desktop performance. The power-efficient 7200-rpm drive maximizes battery life and comes in capacities ranging from 250GB to 500GB with a 16MB cache.

Both Momentus drives are built tough enough to withstand up to 1,000 Gs of non-operating shock and 350 Gs of operating shock to protect drive data, making the drives ideal for systems that are subject to rough handling or high levels of vibration. For added robustness in mobile environments, the Momentus 5400.6 and 7200.4 are offered with G-Force Protection, a free-fall sensor technology that helps prevent drive damage and data loss upon impact if a laptop PC is dropped. The sensor works by detecting any changes in acceleration equal to the force of gravity and parks the heads off the disc to prevent contact with the platter in a free fall of as little as 8 inches and within 3/10ths of a second.

The Barracuda 7200.11 hard drive combines the capacity and speed required for today’s most demanding desktop PC applications. The drive packs 1.5TB on just four platters and its fast Serial ATA 3Gb/second interface delivers an industry-leading sustained data rate of up to 120MB/second for fast boot, application startup and file access. The 3.5-inch drive is also offered in capacities of 1TB, 750GB, 640GB, 500GB, 320GB and 160GB with cache options of 32MB and 16MB.