The guys from Tom's Hardware were lucky enough to get their hands on a 2.93GHz quad-core Nehalem processor and this time they were allowed to publish some benchmark results. They ran a couple of benchmarks from Futuremark and found the 2.93GHz Nehalem engineering sample offers impressive performance gains. The reporter says this early Nehalem sample is 28 percent faster than AMD's fastest quad-core processor in PCMark05:

As we mentioned earlier, this article was meant to give a brief introduction into some basic performance figures for Nehalem. Keep in mind that the CPU launch is still several months away. This is not meant to be an in depth review covering all CPU comparisons and charts. Fortunately, we were able to pull up PCMark 05 performance figures comparing Nehalem at 2.93 GHz and Phenom 9850 BE.

The result is roughly a 33 percent difference. Right in line with what we predicted. For reference, the fastest Phenom available, the 9950 BE running at 2.6GHz was able to give a score of 7680, slightly above the Phenom 9850 BE by 3.7 percent. However, Nehalem is still faster than the fastest Penom 9950 BE by 28 percent.

In every test they ran the 2.93GHz delivered excellent performance and that's very promising as the hardware isn't even mature yet. The final Nehalem CPUs and X58 motherboards, which are expected in the fourth quarter, should deliver even more performance. Check it out over here. Tom's Hardware also said their X58 motherboard prototype didn't allow overclocking but this feature will be available in the production models:

What this means for enthusiasts is that old methods of overclocking will no longer work with Nehalem. What will happen is that the connection between the CPU and the northbridge (X58 MCH), will be based on an external clock multiplier running at 133 MHz. At this time, with an early X58 sample motherboard http://en.wikipedia.org/wiki/Motherboard on hand, we’re still unable to change this frequency, but our motherboard sources tell us that this is a feature that will be available via the system BIOS once things go into full production. 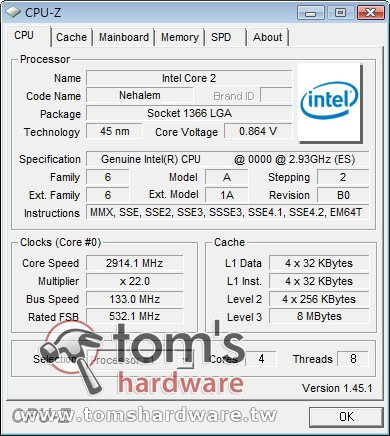