Posted on Saturday, Jul 12 2008 @ 01:21 CEST by Thomas De Maesschalck
The Taiwanese edition of Tom's Hardware has once again leaked a bunch of information about an upcoming piece of hardware, this time it's a set of slides about the Radeon HD 4870 X2. The slides claim the AMD R700 "Spartan" card will be released on August 12th and state this card will offer 2.4 teraFLOPS of computing power.

It has 1600 stream processors, 2x 256-bit memory bus and 2GB GDDR5 memory that delivers 230GB/s of memory bandwidth. The clockspeeds are TBD, either AMD didn't want those to be leaked already or they're still trying to figure out how high they can clock the card.

The card has a dual-slot cooler which will hopefully keep the two GPUs cool and AMD recommends you use the card in a system with a power supply of 650W or greater. In case you want to pair two of these beasts in CrossFireX you'll need a 1000W PSU. 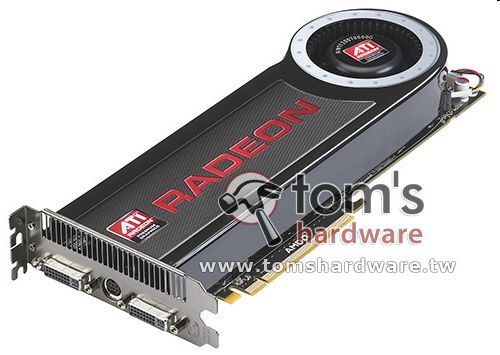