Posted on Monday, Jul 14 2008 @ 22:56 CEST by Thomas De Maesschalck
Creative officially introduced its new Zen X-Fi and Zen X-Fi with Wireless LAN digital media players. These new players have a 2.5" LCD display, FM radio, microphone, a built-in speaker, SD memory card slot and X-Fi technology. Creative claims the X-Fi Crystalizer will restore the highs and lows to music during playback that were lost during the ripping to MP3, WMA or AAC formats.

The ZEN X-Fi and ZEN X-Fi with Wireless LAN provide a breakthrough in sound quality for MP3, WMA and unprotected iTunes music with the X-Fi Crystalizer, a proprietary audio technology developed at Creative's Advanced Technology Center that restores the highs and lows to music during playback that were lost during the ripping to MP3, WMA or AAC formats. This allows you to listen to your music at a higher quality than was previously possible on any MP3 player.

The ZEN X-Fi with Wireless LAN introduces a new way to experience music in your home. The ZEN X-Fi's wireless LAN capability enables you to wirelessly stream and download music from your PC to your player over your wireless home network, and play it back with X-Fi audio quality. From the living room to the patio, the ZEN X-Fi with Wireless LAN can access the music on your home PC, which can be played through the built-in speaker, a home speaker system, or even the TravelSound ZEN X-Fi docking speaker system accessory, which provides room-filling X-Fi audio quality in a portable speaker. You can also stream and download your video files in supported formats and your photos directly to your ZEN X-Fi with Wireless LAN from your PC. In addition, you can stream a variety of ZENcast(TM) and podcast channels to the player.

"We're very excited to achieve this breakthrough of adding our X-Fi audio technology to a ZEN player, setting the highest standard in audio quality for portable music players," said Craig McHugh, president and COO of Creative. "Some of the top recording artists in the music industry are very outspoken about the poor quality of digital music. We addressed the issue of the poor quality of digital music by inventing X-Fi technology, which restores the quality of music that was lost during the digital ripping process, and now for the first time ever we've been able to implement this technology in a ZEN." 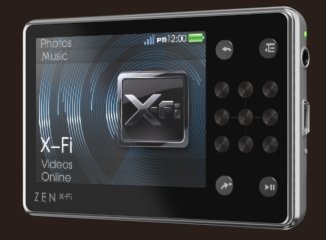