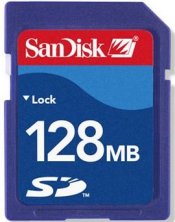 SanDisk has unveiled the first Write Once Read Many (WORM) SD memory card. Once data has been written to these cards there's no physical way to alter or delete individual recorded files. SanDisk says applications for the SD Worm card include police investigations, court testimony, electronic voting, medical devices and other applications where data files must be protected from alteration or deletion. The first SanDisk SD Worm memory cards are now available in 128MB capacity and higher capacities should follow later this year.

“As digital media volume has grown and surpassed traditional analog media such as film and audio cassettes in the consumer market, law enforcement agencies and other professionals are facing rising costs and lack of supply,” said Christopher Moore, director of product marketing for OEM memory cards at SanDisk. “SanDisk’s new SD WORM cards offer professionals a one-stop solution for capturing and archiving critical data, along with many other benefits of moving from analog to digital.”

For example, the benefits for photography in these applications include eliminating the expense and delay of film processing, as well as subsequent scanning of negatives into digital files. With voice, in-field recorders become more reliable because they no longer have moving parts, and there are no more tapes that can tangle or break. SanDisk SD WORM cards also open up the possibility of unified storage, with all case data – text, photos, voice recording, etc. – stored on a single durable card that can be easily shared.

SanDisk is now partnering with manufacturers of cameras, digital voice recorders, medical equipment, electronic cash registers and other digital devices to add the firmware required for recording to SanDisk SD WORM cards. SanDisk is also working with the SD Card Association for approval of this new specification as an industry standard.

In addition, third-party resellers of SanDisk SD WORM cards can develop security enhancements for the cards, such as password protection and encryption. One enhancement now under development for the cards is the addition of TrustedFlash™ security technology developed by SanDisk that securely stores sensitive digital data and applications on digital media.