A slide which reveals some details about Intel's upcoming Havendale processor was published by FUD Zilla. The site reveals this processor will arrive in late 2009 and will be Intel's first processor with integrated graphics - or iGFX as Intel likes to call it.

Havendale is a dual-core, Nehalem derived 45nm CPU and therefore it comes with integrated memory controller on the CPU side of the chip. The chip supports DDR3 and it interconnects with Ibex peak via a direct memory interface (DMI).

The Ibex peak Southbridge is interconnected with the GPU through Intel's Flexible Display Interface (FDI) and the chipset should provide display connectivity. The chipset also has an input/output part and something called a Manageability engine. The latter is something that Intel already has in its 4-series Northbridge. 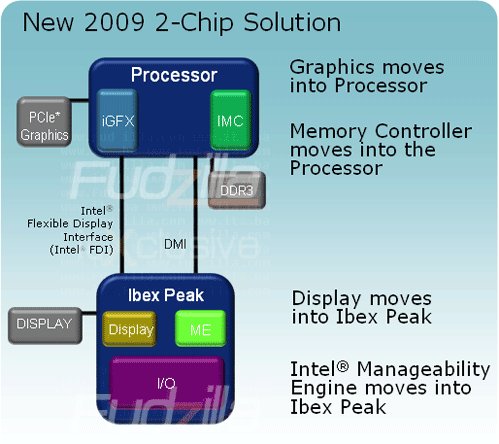