Posted on Thursday, Jul 31 2008 @ 00:31 CEST by Thomas De Maesschalck
While testing the Intel Atom and VIA Nano processors Joel Hruska found a very interesting feature of PCMark05. He heard rumours that performance in PCMark05 could change depending on what CPUID was handed to the benchmark and the VIA Nano finally gave him the chance to test this rumour as contrary to AMD and Intel, VIA doesn't lock the CPUID.

Nothing is wrong with the system, CPU, graphics and HDD tests but in the memory test something fishy is going on. The ARS Technica reporter noticed that when he altered the Nano's CPUID to Intel's CPUID the performance in the PCMark05 memory test magically jumped up 47.4%! Perhaps this is just an unfortunate anomaly but it does cast some doubt on Futuremark's neutrality:

My my. Swap CentaurHauls for AuthenticAMD, and Nano's performance magically jumps about 10 percent. Swap for GenuineIntel, and memory performance goes up no less than 47.4 percent. This is not a test error or random occurrence; I benchmarked each CPUID multiple times across multiple reboots on completely clean Windows XP installations. The gains themselves are not confined to a small group of tests within the memory subsystem evaluation, but stretch across the entire series of read/write tests. Only the memory latency results remain unchanged between the two CPUIDs.

At the very least, this suggests some incredibly sloppy coding on Futuremark's part, as the company may be enabling or disabling CPU optimizations based on a processor's vendor name in CPUID instead of actually checking CPUID for SIMD support. In this case, PCMark 2005's memory subsystem test doesn't appear to be aware that Nano supports SSE2 and SSE3, and is instead running a decidedly less-optimized code path. There are two factors, however, that make this explanation a bit difficult to swallow. 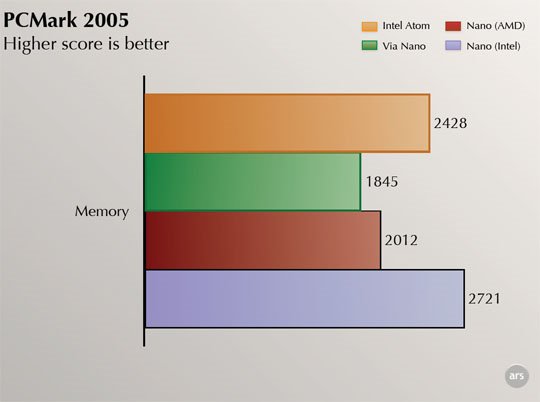