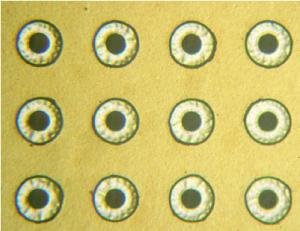 DailyTech reports Microsoft and Anna Pyayt, a graduate student from the University of Washington, have developed a new display technology that offers much better energy efficiency than LCD displays:

The new technology uses optics that are similar to those used in telescopes.

According to IEEE Spectrum, a typical LCD in use today is backlit and less than 10% of the light produced by the backlight is transmitted to the surface of the LCD screen. The polarizing layer alone absorbs 50% of the light output from the backlight.

The researchers say that in theory, as much as 75% of the light in the telescopic pixel display could reach the surface of the screen. Another benefit of the design is a much higher rate of speed at which the pixels can be turned on and off. The telescopic pixel can go from dark to light in 1.5ms.