Posted on Saturday, Aug 02 2008 @ 04:00 CEST by Thomas De Maesschalck
Shacknews saw a demo of Wolfenstein at QuakeCon 08 and published their first impressions:

The demo began with a machinegun-armed B.J. blasting away at swastika-bearing soldiers, making his way to an objective amidst an urban battlefield. After some standard gun play, we got a taste of the "Veil" powers, special abilities that B.J. can activate to give him an edge in combat. The first revealed was a time-stopping power, which naturally slowed combat down to a snail's pace.

When used, these powers will shift B.J. into the Veil world, the green-hued, energy-filled realm that Hitler is after. The Nazis are the only ones who have been meddling in this world, so enemy structures will exist in the Veil--a sort of Soul Reaver-esque changing of level geometry.

Strange bee-like aliens also inhabit the Veil, collecting some kind of energy for a mysterious purpose. These fat alien bees can be shot and killed, their amassed energy exploding outward and damaging the soldiers around them. While the bees were all we saw, Raven noted that other types of creatures will show up later in the game, and they may be utilized to accomplish objectives. 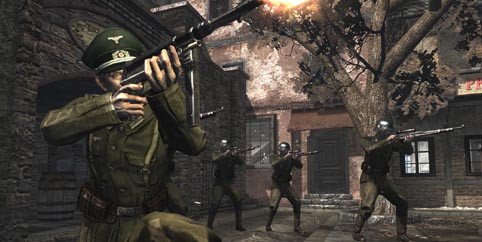