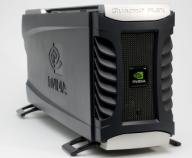 NVIDIA has released a couple of new Quadro Pley systems, these products are mainly used in the styling and design, geosciences and scientific visualization industries. NVIDIA claims the new models deliver a performance improvement of up to 100 percent over the previous generation.

A Quadro Plex D series VCS can turn workstations and servers into visual supercomputers. Easily connected to a host workstation via a low-power PCI Express adapter card, the Quadro Plex VCS gives workstations the massively parallel processing capabilities of multiple Quadro graphics cards and features an ultra-quiet design, allowing the system to be deployed deskside. It can also be deployed in a standard 3U, 19-inch rackmount configuration, for maximum visual computational density.

The new Quadro Plex 2200 D2 VCS houses two Quadro FX 5800 GPUs, providing 480 NVIDIA CUDA Parallel Computing Processor cores and 8GB of graphics memory. The thermal and power management capabilities of the chassis offer up to 20% performance improvement over standard add-in graphics, making it the most powerful visual computing system available. The Quadro Plex 2200 D2 VCS houses up to four Quadro FX 4700 GPUs, powering up to four displays via its dual-link DVI outputs, and up to eight displays with its high-resolution projection capabilities.

"For the first time, the Quadro Plex D Series, with our latest Quadro GPU technology, brings visual supercomputing to the deskside, combining advanced visualization and computational performance together in a Quadro system," says Jeff Brown, general manager, Professional Solutions, NVIDIA. "From the unprecedented power of the Quadro Plex to our Quadro FX mobile notebook solutions, professionals across multiple markets can now get the level of Quadro performance that best meets their individual visualization needs."

The Quadro Plex D Series VCS will be available in September 2008 with prices beginning at $10,750.