Posted on Monday, Aug 18 2008 @ 00:59 CEST by Thomas De Maesschalck
NASA reports the Cassini spacecraft has discovered the source of the icy jets which erupt from the surface of Saturn's geologically active moon Enceladus:

New carefully targeted pictures reveal exquisite details in the prominent south polar "tiger stripe" fractures from which the jets emanate. The images show the fractures are about 300 meters (980 feet) deep, with V-shaped inner walls. The outer flanks of some of the fractures show extensive deposits of fine material. Finely fractured terrain littered with blocks of ice tens of meters in size and larger (the size of small houses) surround the fractures.

"This is the mother lode for us," said Carolyn Porco, Cassini imaging team leader at the Space Science Institute, Boulder, Colo. "A place that may ultimately reveal just exactly what kind of environment -- habitable or not -- we have within this tortured little moon."

One highly anticipated result of this flyby was finding the location within the fractures from which the jets blast icy particles, water vapor and trace organics into space. Scientists are now studying the nature and intensity of this process on Enceladus, and its effects on surrounding terrain. This information, coupled with observations by Cassini's other instruments, may answer the question of whether reservoirs of liquid water exist beneath the surface.

The high-resolution images were acquired during an Aug. 11, 2008, flyby of Enceladus, as Cassini sped past the icy moon at 64,000 kilometers per hour (40,000 miles per hour). A special technique, dubbed "skeet shooting" by the imaging team, was developed to cancel out the high speed of the moon relative to Cassini and obtain the ultra-sharp views.

"Knowing exactly where to point, at just the right time, was critical to this event," said Paul Helfenstein, Cassini imaging team associate at Cornell University, Ithaca, NY., who developed and used the skeet-shoot technique to design the image sequence. "The challenge is equivalent to trying to capture a sharp, unsmeared picture of a distant roadside billboard with a telephoto lens out the window of a speeding car."

For scientists, having the combination of high-resolution snapshots and broader images showing the whole region is critical for understanding what may be powering the activity on Enceladus.

"There appears to have been extensive fallout of icy particles to the ground, along some of the fractures, even in areas that lie between two jet source locations, though any immediate effects of presently active jets are subtle," said Porco.

Imaging scientists suggest that once warm vapor rises from underground to the cold surface through narrow channels, the icy particles may condense and seal off an active vent. New jets may then appear elsewhere along the same fracture.

"For the first time, we are beginning to understand how freshly erupted surface deposits differ from older deposits," said Helfenstein, an icy moons expert. "Over geologic time, the eruptions have clearly moved up and down the lengths of the tiger stripes." 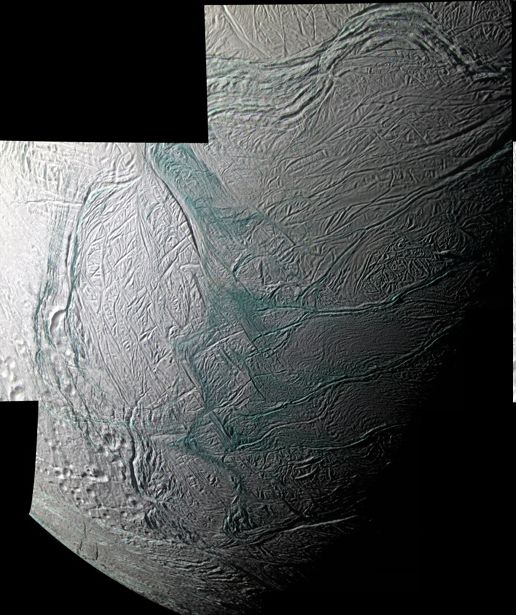