Posted on Thursday, Aug 21 2008 @ 09:22 CEST by Thomas De Maesschalck
Sharkoon informed us about the launch of their Flexi-Drive Slive USB memory sticks. These new models are available in 2GB, 4GB and 8GB capacities with prices of 7EUR, 11EUR and 22EUR, respectively.

The sticks are pretty cheap and feature a cap-less design but the drawback is the slow transfer speeds. The Flexi-Drive Slide can only read at 12.5MB/s and the write speed is only 4.8MB/s. That's more than three times as slow as the fastest USB sticks I've tested.

Sharkoon is expanding its Flexi-Drive line-up of USB sticks with a new model. The Flexi-Drive Slide is enclosed in an elegant, two-sided metal casing--one side in aluminium and the other painted in high-gloss black with red lettering.

The intuitive design uses an integrated, cap-less protection system for the USB connector and can be easily extended or retracted through the slide-out mechanism. With its slim measurements of 20mm x 50mm x 8mm (W x L x D), the Flexi-Drive Slide is only as big as a small matchbox. The USB stick reads at 12.5 MB/s and writes at 4.8 MB/s. The Plug & Play device is bootable and available in the capacities of 2, 4 and 8 gigabytes. 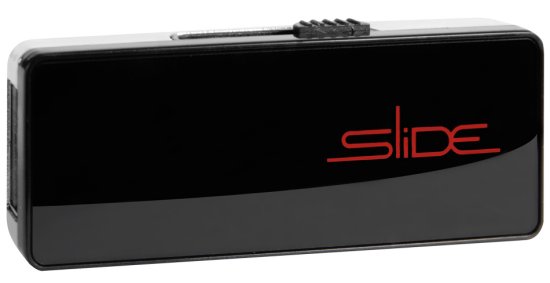