Posted on Tuesday, Aug 26 2008 @ 04:56 CEST by Thomas De Maesschalck
AnandTech has published lots of coverage of NVIDIA's keynote at their NVISION 2008 event. The main subject of the keynote were the advancements in visual computing, it wasn't really about NVIDIA or NVIDIA's products but about all the cool things that are going on in the industry.

One of the things NVIDIA presented are the multi-touch interfaces that are possible with today's GPUs:

5:50PM - Actually manipulating user interfaces in hugely complex ways (with 10 fingers on many people) is possible because of the GPU today (Anand: correction, this is the coolest demo of the keynote).

5:45PM - Even cooler things can be done with really large screens (Jeff just called 30" displays small). Pretty cool stuff. Multiple people can use a large screen to cooperate on the same computer and screen and even data set without fighting over a cursor.

5:43PM - Jeff is talking about using gestures on a screen to invoke anything you need and get rid of statically positioned interfaces. He's also got some cool particle effects and maps he is showing off as well.

5:41PM - "The mouse has actually become a bottleneck in what we can do," says Jeff Han. He's talking about multi-user multi-touch. 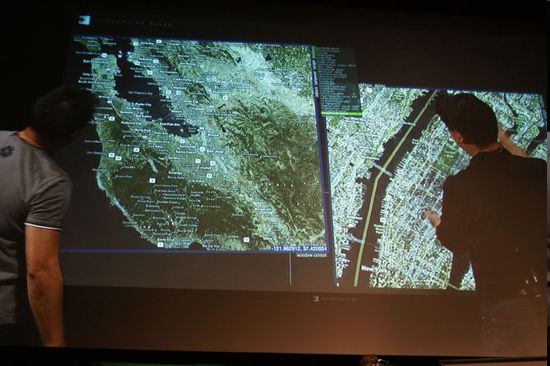