Posted on Sunday, Aug 31 2008 @ 23:50 CEST by Thomas De Maesschalck
Custom PC heard Microsoft talk about tessellation - this will be one of the new features in DirectX 11.

The overall goal of DirectX 11 will be to ease the workload of current GPUs and of game developers. To achieve these goals, new types of shader are being added to the API, including a hull shader and tessalator domain shader, in addition to the compute shader which has been mentioned previously.

The tessalator is arguably the most interesting development Gee talked about, and is a good example of DirectX 11's focus on performance. As wireframes (i.e the 3D models of characters and objects in a game) become ever more complex, the amount of memory used increases. The tessalator unit simplifies complex wireframes, making them more digestible for the GPU and so reducing memory usage.

DirectX 11 will also be optimised for GPGPU work and multithreading. According to Gee, taking a GPGPU approach to post process rendering effects such as bloom and HDR will create 'significant performance benefits'. 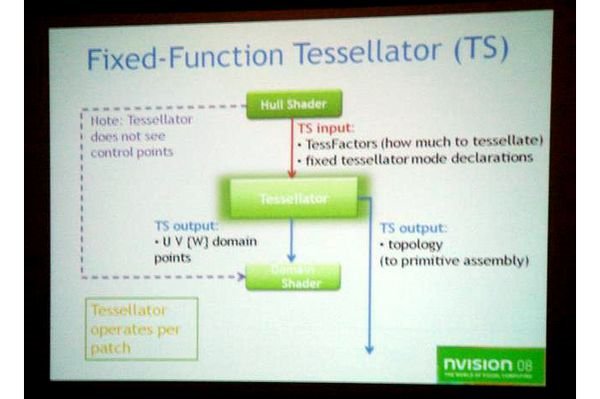