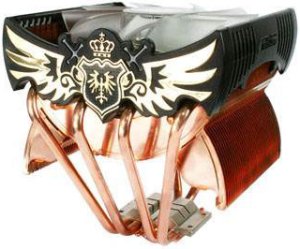 Following the massive worldwide popularity of the all copper-made Silent Knight II CPU cooler, ASUS, producer of top-notch cooling solutions has today unleashed the second variant in its all copper-made CPU cooler range – the ASUS Royal Knight. Keeping in line with its predecessor’s effective cooling methods, the Royal Knight retains an all-copper buildup and utilizes 6 heat pipes to maintain low CPU temperatures for maximum stability. Furthermore, the outlook is drawn from the British Chevalier style; inclusive of a motif comprised of a crown, an eagle and a coat of arms to portray the overall spirit of the Knight Series.

This latest Royal Knight utilizes a brand-new design that provides for an advanced thermal solution. This includes 6 pure copper heat pipes for efficient heat transference; a 120mm LED fan with a top-flow design for maximum air-flow; and last but not the least, twin wing-shaped copper fins that expands the heat exchange area for excellent thermal performance.

Equipped with a 120mm LED fan, the Royal Knight not only provides maximum air-flow, but also ensures a quiet computing environment with operating levels of only 22 dBA. This is due to the PWM function, which automatically adjusts the fan speed according to the CPU’s temperature – allowing gamers to fully immerse themselves into their games without other distracting noises.